The city of Rome offers so much adventure for every single visitor. There are places with an incredible reputation and those that have been regarded as the ultimate destination no one should ever miss. Here are some of the tourist traps in Rome that are worth every single hype on them. The ancient Romans built the temple in honor of the gods. It was commissioned during the reign of Emperor Augustus but was completed by Emperor Hadrian. However, in the year 608 AD, the temple was given to Pope Boniface IV, from Phocas, the Byzantine Emperor. Visiting the Pantheon on your vacation to Rome is like a must because this is not the place anyone should ever miss. From the exterior, you can see the magnificence of the building. There are 16 Corinthian columns brought all the way from Egypt to provide support and beauty for this structure. The most important part is the dome, which has a hole in the middle so that light rays can pass through, adding to the holiness of the structure. Click the next ARROW to see the next photo! 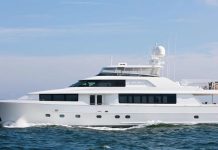