Greece is famous for its rich history, monuments and of course it’s ancient sculptures. Below you’ll find the most beautiful sculptures Greece has to offer and where to find them! 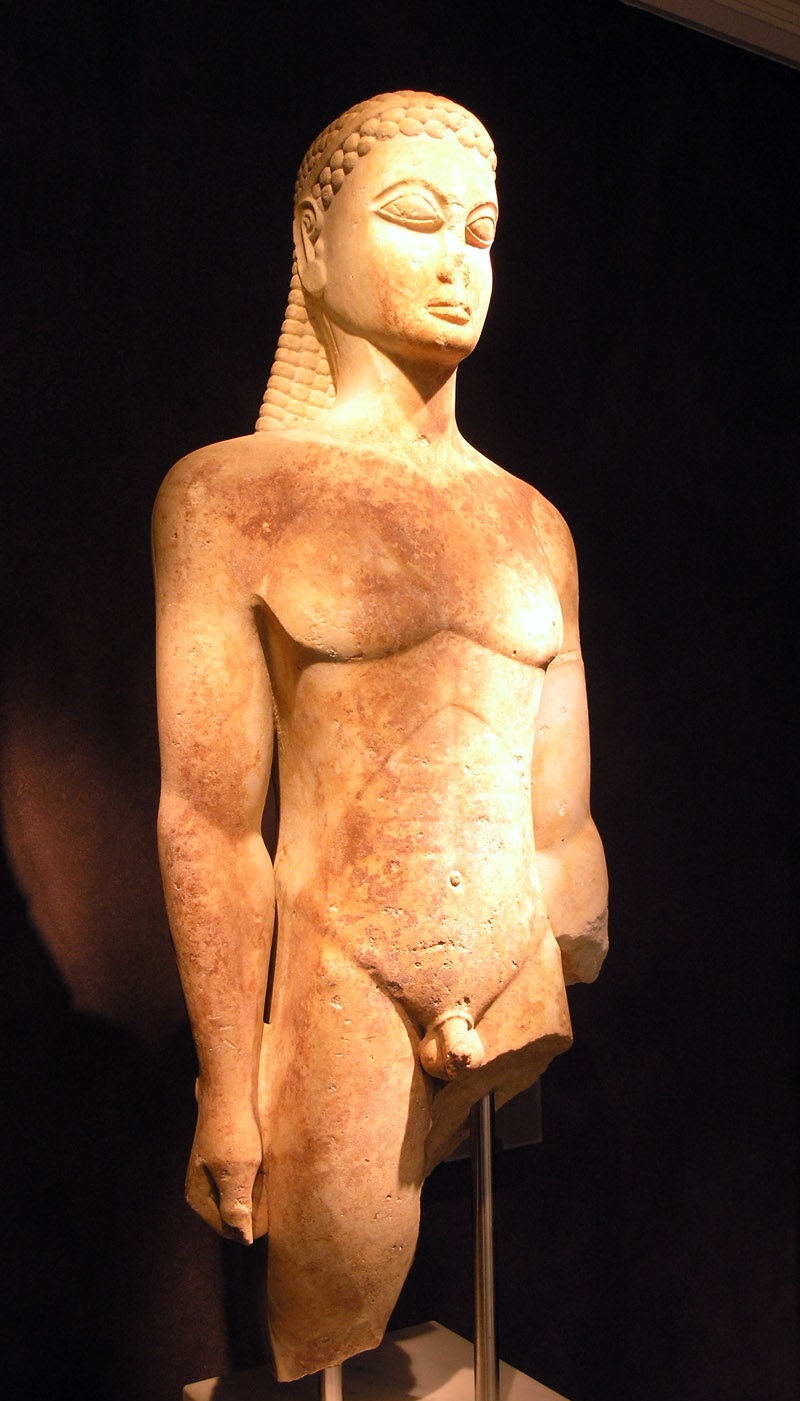 It is a head, about 44 centimeters high, that is to say, one size larger than natural. In this Dipylon Head you can see many of the usual characteristics of the most archaic Greek sculpture. In fact, many of its elements can be seen in other works from that artistic period, such as the Kouros of Sounion, or the Kouros of Volamandra, although in these two cases we have practically the complete figure, and not only head. 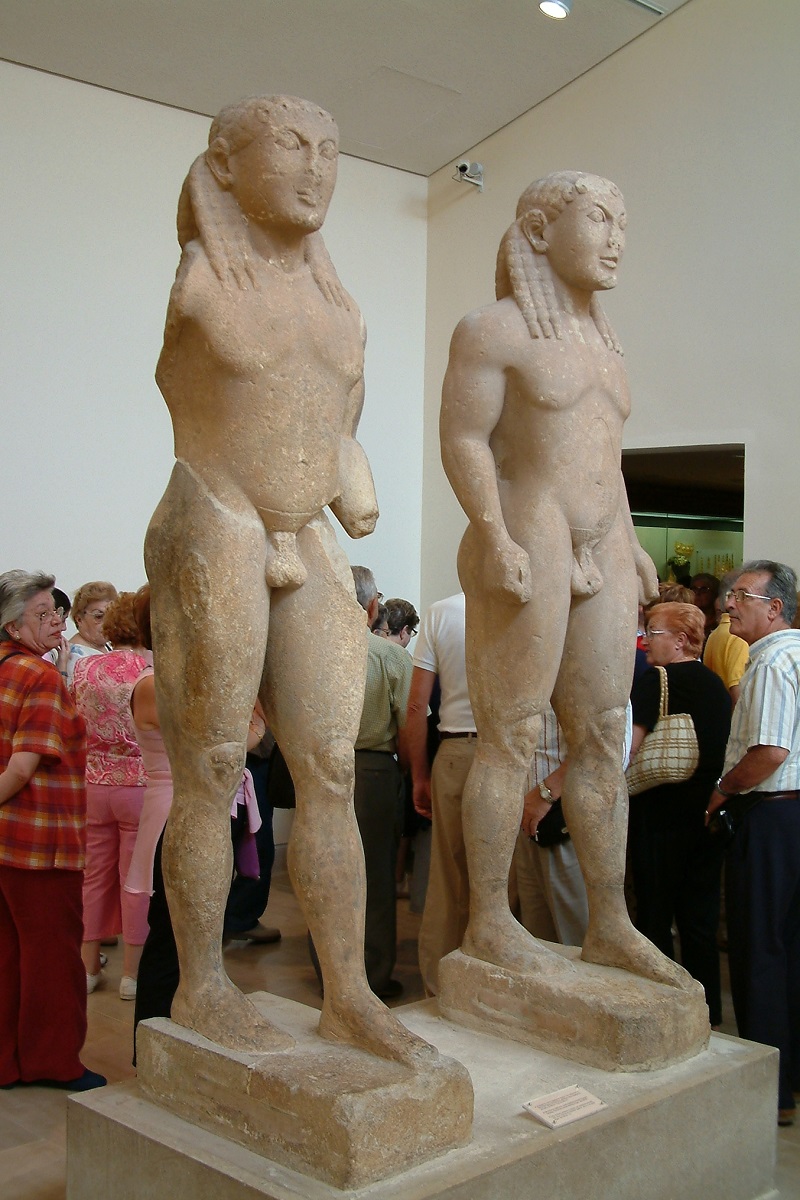 These are figurative, free-standing or round-shaped sculptors of a clear naturalistic and idealized character. They are two naked young men, standing, with hair braided over their shoulders. They represent the twins Cleobis and Bitón.They are large, 2.13 m with a plinth included. Its carving is made of marble. 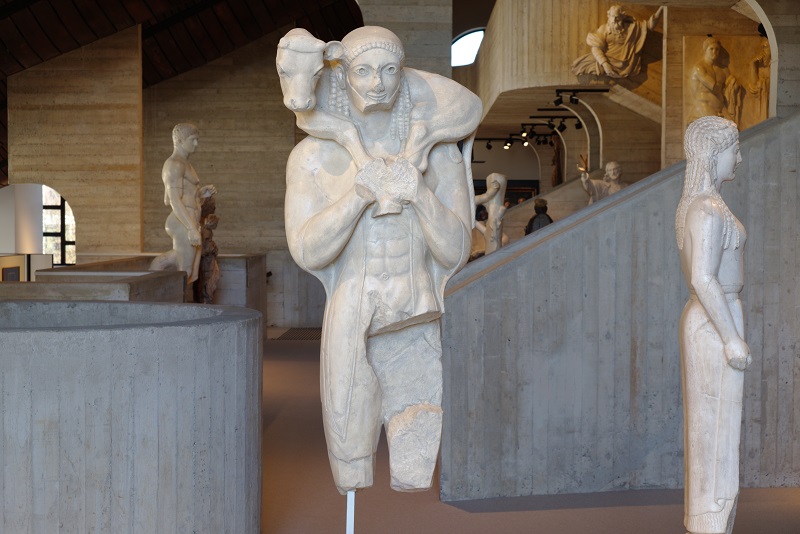 The sculpture of the Moschophoros, or young man with a beard carrying a calf on his shoulders, is a «kuros», dating from 570 BC. C., sculpted in marble by an anonymous artist from the Attica workshops, which is considered one of the masterpieces of the Archaic Period of Greece. It is exhibited in the Acropolis Museum in Athens. The Moschophoros is 165 centimeters high and was found among the ruins of the Acropolis of Athens. It was offered to the goddess Athena, by Rombos, son of Pales, as is known from an inscription on its base, and represents a man who is going to sacrifice a ram. It is a precedent for the classic Christian version of the good shepherd. 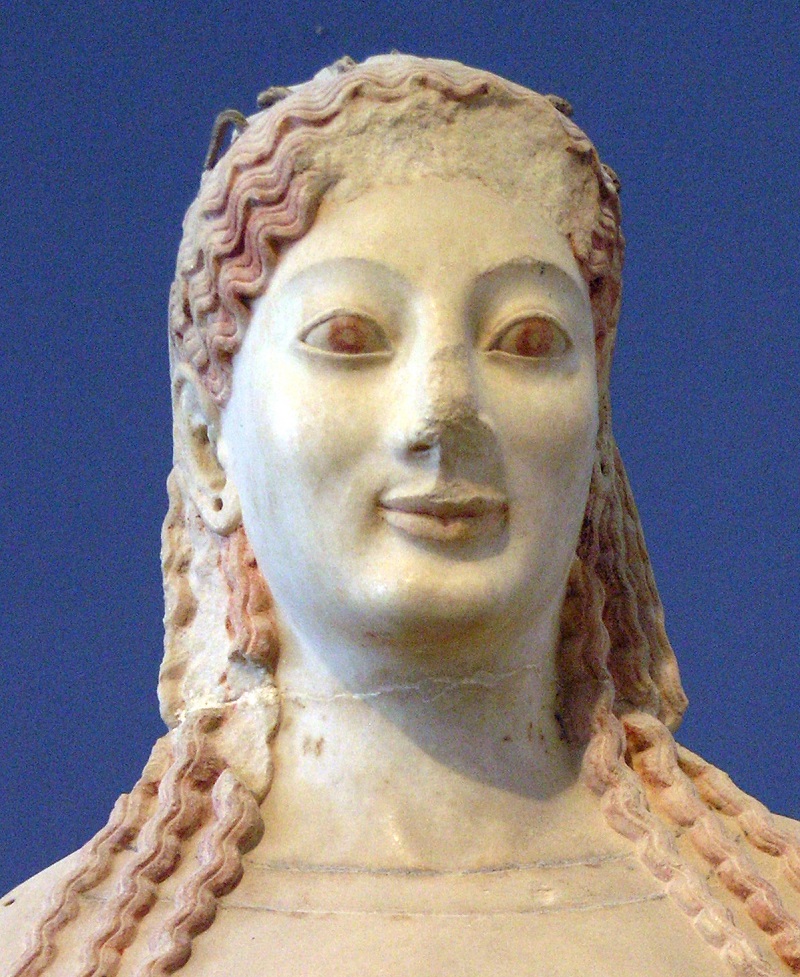 Peplos kore is one of the best sculptural examples of archaic Greek statuary, made around 540 BC. in marble from the island of Paros, a highly valued material at the time for its whitish color and almost free of impurities. The sculpture measures about 120 cm and is attributed to a well-known Attic sculptor who would also make the sculpture of the Knight Rampín. Throughout the 19th century, various excavations were carried out in the ancient Athenian Acropolis, the fruit of these laborious works was the discovery of a series of sculptures, among which a singular series of female figures known as Kore or Korai in plural stand out. 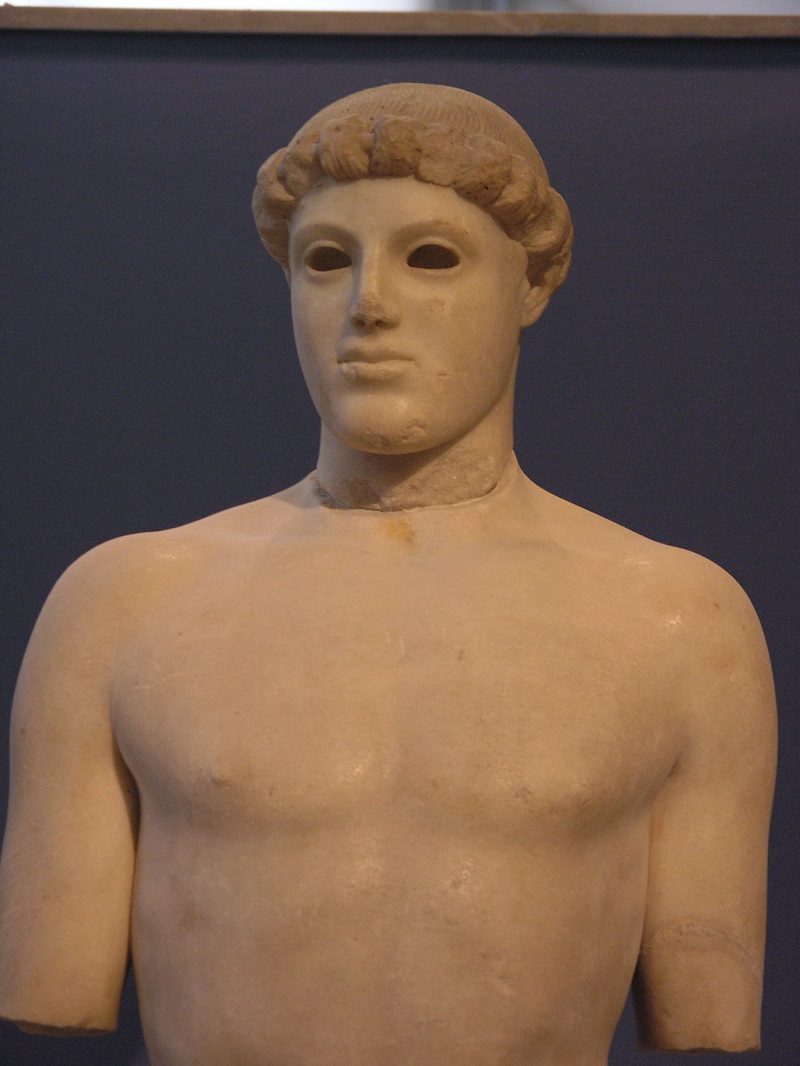 The Ephebo of Kritios, also known as the Boy of Kritios, is a sculpture dating from approximately 490 BC, belonging to Greek art, specifically the early classical Greek style. It was sculpted by the Greek sculptor Kritios, it also represents the beginning of the severe style within Greek sculpture, being a transition between the archaic period and the classical period.

The Charioteer of Delphi 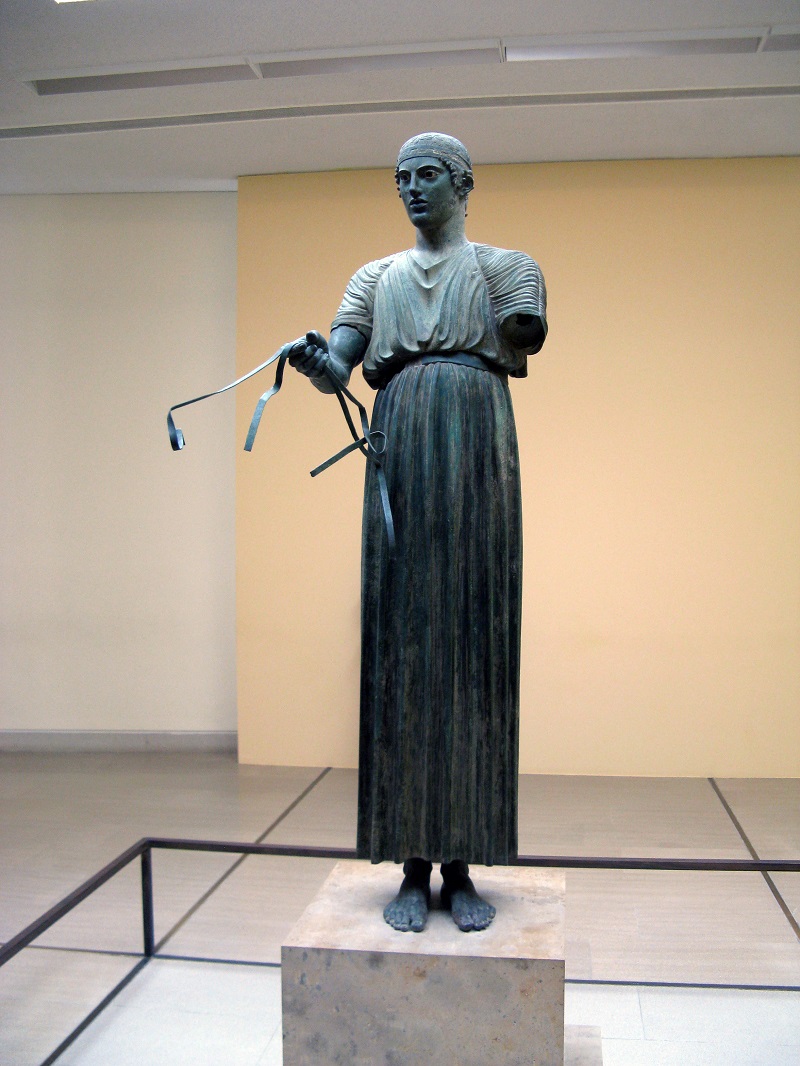 The charioteer of Delphi is a round sculpture from classical Greece. The work can be framed within the so-called Severus style that developed in the first years of the 5th century and was a time of transition between the first forms of archaism and classicist sculpture, already fully naturalistic. 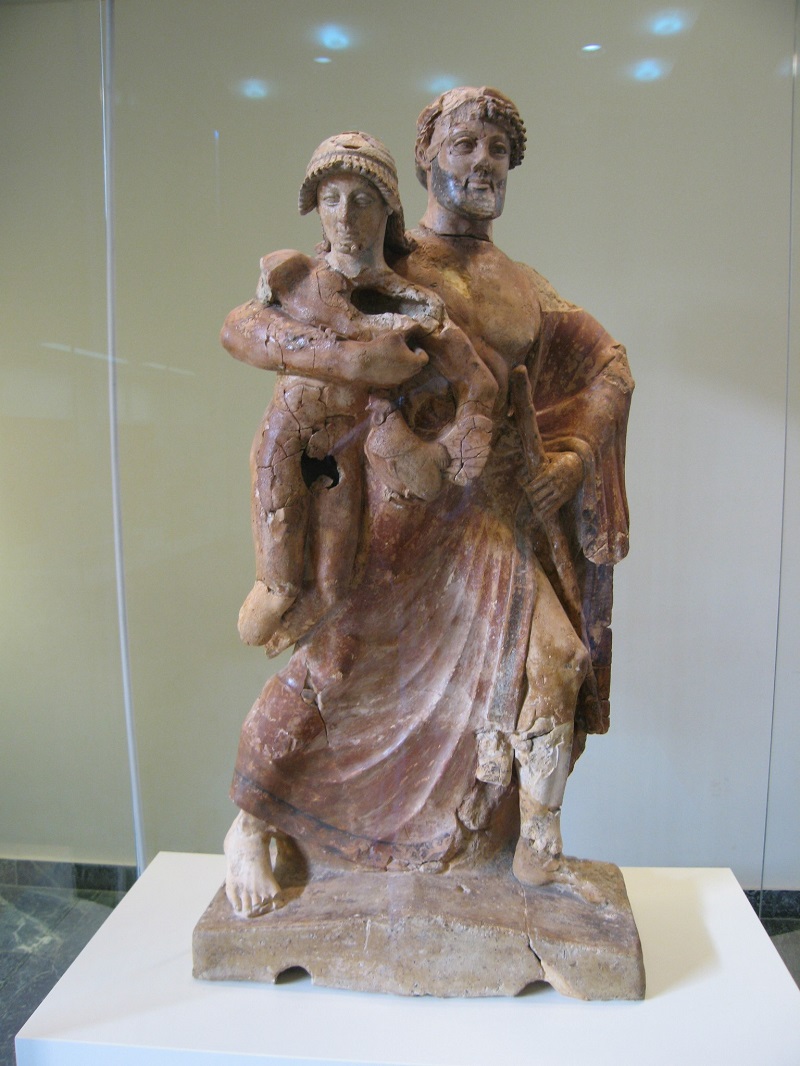 It is a mythological sculpture that represents the relationship between Ganymede and Zeus. Thus it is narrated how the young Ganymede was a Trojan prince who was on Mount Ida when Zeus, the father of the gods saw him and fell in love with him; Then, transforming into an eagle, he kidnapped the young man, taking him to live in Olympus and making him the cupbearer of the gods. 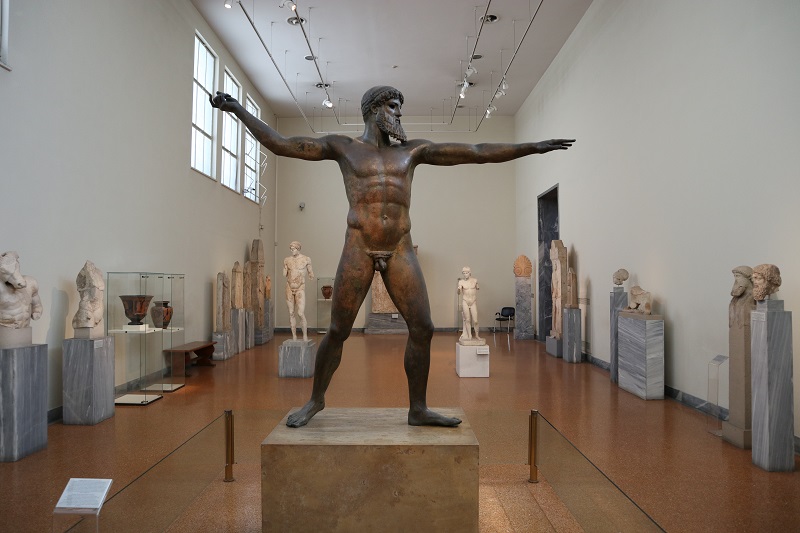 It represents a naked man, of mature age, at the moment when he is about to throw a spear with his right arm. It was found, like so many other original Greek pieces, at the bottom of the sea, in 1928, near Cape Artemisio, north of the island of Euboea. One of the arms of the statue had been found two years earlier, in 1926. The bronze has been dated around 460 BC. C.; The piece therefore corresponds to the golden age of Hellenic civilization, to the 5th century BC. when art reached its fullness in terms of representing the ideal of beauty. The work constitutes one of the paradigms of classical Greek sculpture. 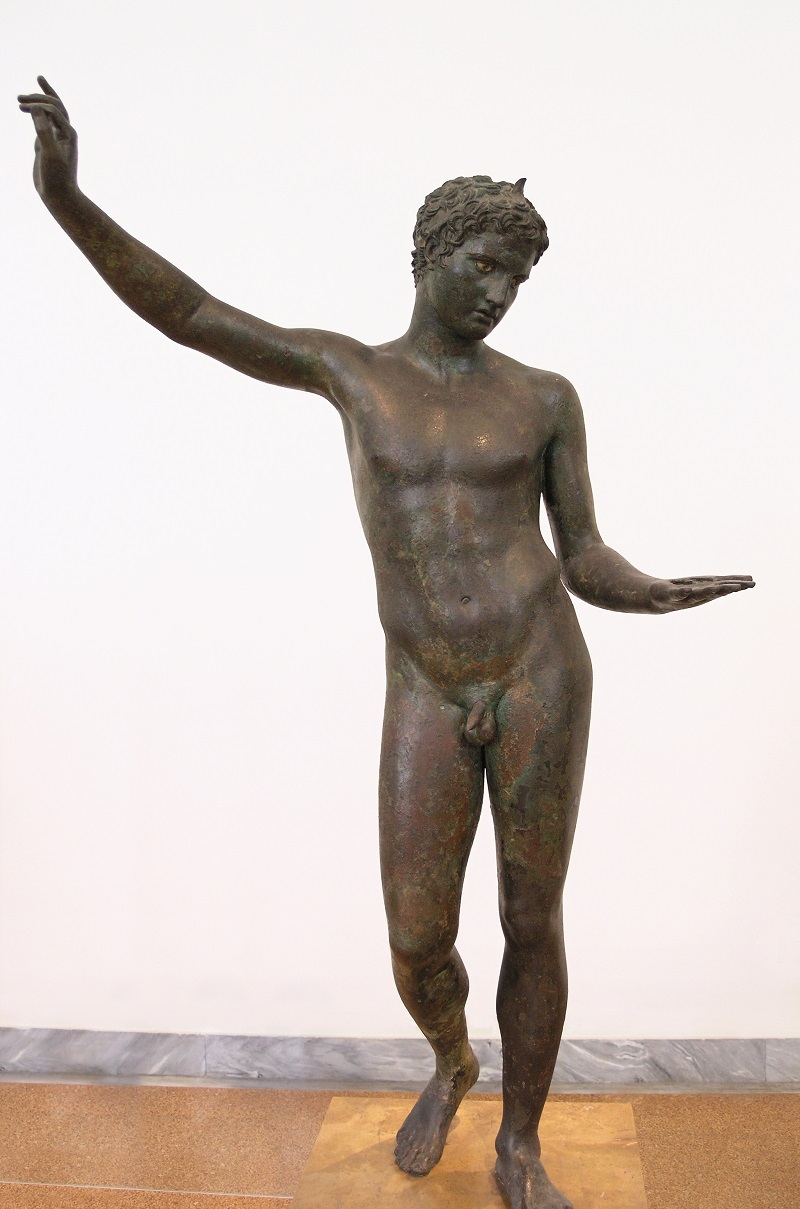 The Ephebo of Marathon is an ancient Greek sculpture found in the Aegean Sea, in the Bay of Marathon in 1925. It is currently in the National Archaeological Museum of Athens, in which the sculpture was dated to around 325-300 BC The experts of the Museum suggest that the sculpture itself could be a young representation of Hermes, although it is true that neither one of the typical attributes of this deity is found in the piece. However, with its soft musculature and its exaggerated contrapposto the style gives a good account of a clear influence of Praxíteles in his contemporaries, being the Efebo de Marathon one of the works closest to this style. 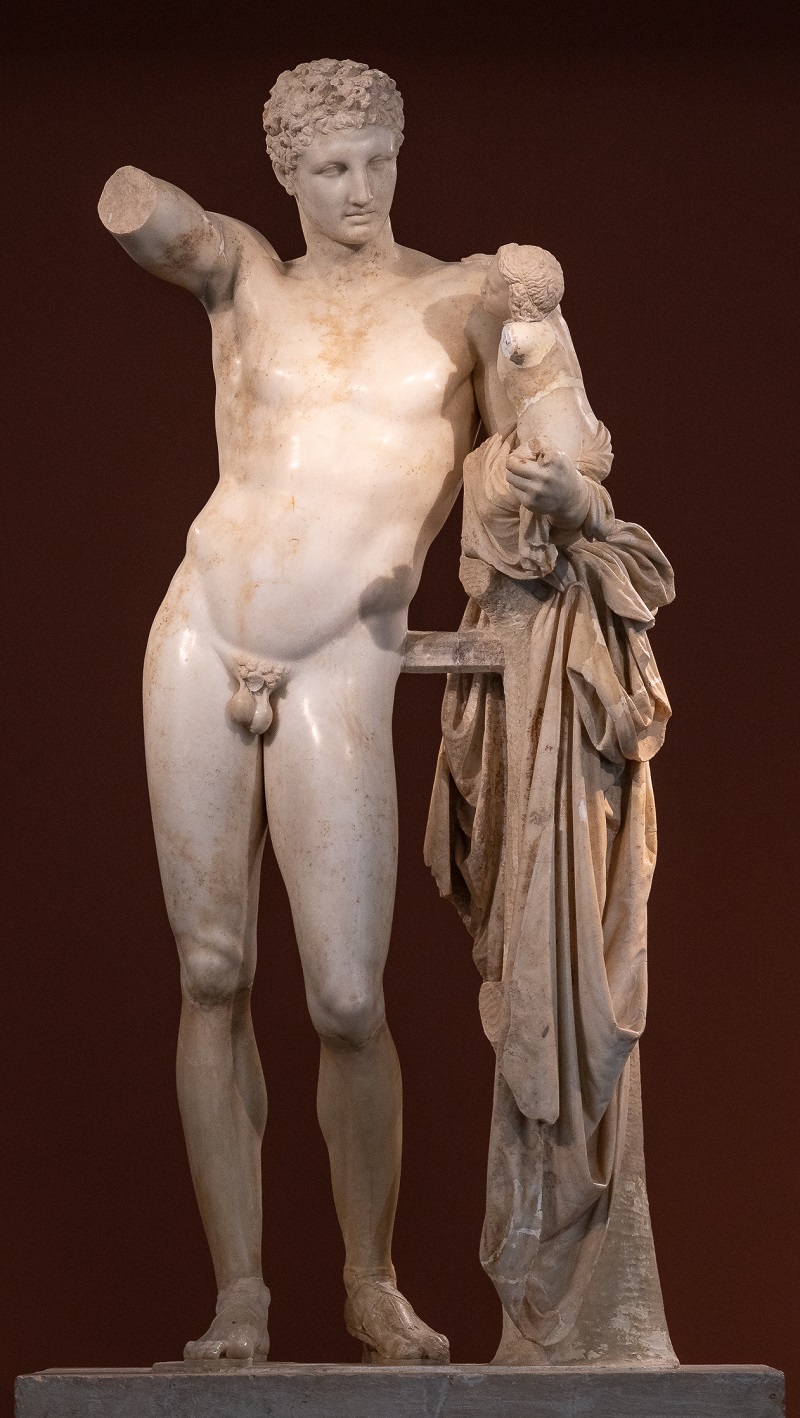 This sculpture representing Hermes with the child Dionysus in his arms is attributed to the Athenian sculptor Praxíteles, from the 4th century BC. C. and could be the only original work of this sculptor that lasts in our days. The sculptural group carved in a block of marble from Paros of the best quality, measures 213 centimeters and the complete work with the base about 370 centimeters. It represents the god Hermes holding his brother Dionysus in his arms, to whom he offers a bunch of grapes (not found) that the boy tries to grasp with his little hands.

The Best Flea Markets in Manchester

The Most Popular Drinks In Kuwait

December 11, 2019
We use cookies to ensure that we give you the best experience on our website. If you continue to use this site we will assume that you are happy with it.Ok